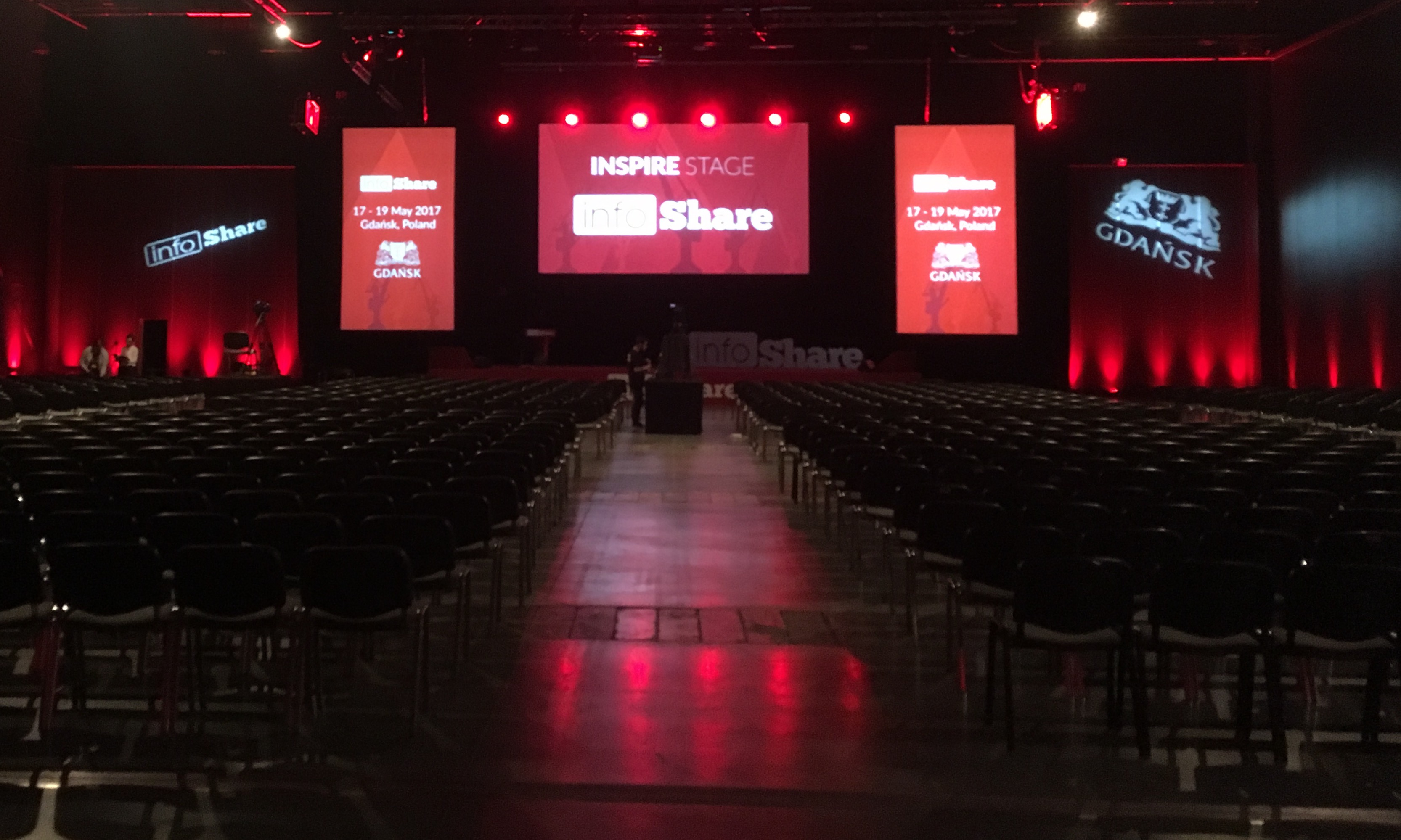 Four days long Gdansk was under the influence of infoShare, with the main attention focused on the two days’ conference on the 17th and 18th of May 2017. Over 6.000 people attended the biggest tech conference in the CEE region. I had the honor to host the Inspire stage. I was thrilled by the quality of speakers we had on stage. Summarizing what all has been shared is close to impossible; below you will find some of the highlights of the Inspire Stage.

Several speakers mentioned impressive numbers proving that technology keeps developing at an amazing high pace. This offers many opportunities, but at the same time challenges as well.

The role of the entrepreneur is a very important one, but not as important as many might believe explained @gregslamowitz, writer of the book “Flip the Pyramid: How Any Organization Can Create a Workforce That Is Engaged, Empowered, Aligned and On Fire!“. Entrepreneurs will have to realize they are not the smartest person in the room, that it is all about employees and then clients, but not about themselves.

Learn it's not about you, but about everybody around you @gregslamowitz #Entrepreneur #infoShare

@robinwauters showed us that the current investment climate in the EU is rather healthy and investments have increased year-on-year. He concluded that there is a major difference in between the US and the EU noticeable. The majority of the investments in the EU are related to acquisitions of companies once they have become successful and need to scale, there is less early stage investment money available in the EU.

There’s a Fantastic Four of new key technologies you just have to know about: the cloud, cognitive computing, blockchain and user experience. All these innovations provide many opportunities, but how to make that young and old can benefit from it? We will have to be sure that technology is relevant for people and that we take care about the user interface (UI). And this was not only mentioned by @iammobilebob. AI is increasingly the new UI, but demonstrations showed it is still far from flawless.

We need to make technology relevant for people and take good care about the user interface @iammobilebob #infoshare pic.twitter.com/mn0PXiQlHy

Catching up with these technological developments in the traditional linear way is no longer an option, it’s just too much too handle mentioned @BalzerSB. We need different management practices, organizations will have to rethink their structures and set the right priorities.

At the same time jobs are at risk showed Marcin Hejka. Artificial Intelligence (AI) is already making regular jobs redundant, humans are being replaced by “machines” and this time no job level is being saved.

Human labour at risk. About 40% of jobs might be replaced by technology according to Marcin Hejka of @intelcapital #infoShare #ai #bigdata pic.twitter.com/xzQmQzFcoQ

We are moving into the era of intelligent enterprises. They will be more productive than ever before and technology changes the way we are organized. Jacek Borek of @AccentureTech showed that based on Accenture’s 2017 Technology vision, which you can download here.

The future of technology: technology by people, for people; 5 main trends according to @AccentureTech #infoShare pic.twitter.com/gB3gH4IOY8

With the increasing amount of online activities we will need reliable and secure payment methods, which @vilashpoovala shared with us. These methods should be easy to use by the client, which currently too often is not always the case.

A lot of valuable thoughts on business model, customer and payments from @vilashpoovala on Inspire Stage pic.twitter.com/0TmznG2Q6Q

A completely different challenge we are facing is our food chain. Due to natural disasters, a growing society and environmental challenges, we must rethink how and what we eat. Trend analyst @hatalskacom took us on a journey into the future and what our food might look like.

The future of our food chain and the role of technology discussed by @hatalskacom #infoShare pic.twitter.com/wozteAzCiT

One of the drawbacks of technological innovation is the amount of information we handle. Daily we take 35.000 decisions, which results in decision fatigue. When designing new solutions, we need to take this fact into account and we should design the UI in such a way that it works for people. Predictive analysis, based on many decisions made in the past, can lead to an anticipatory experience as @heathriel explained to us.

Decision Fatigue causes us to be paralyzed by the very tools meant to save us time. We can do better. #infoShare2017 #infoshare https://t.co/7tLIgjPb1E

The Gdansk public transport organisation ZTM announced a new program disclosing a lot of available data regarding the transport in the city. Developers are invited to develop applications that will support the transport effectivity and efficiency of the city.

Due to the speed of change, we need to adjust our organisations to be able to benefit from technology and this needs guts, you need to dare to cross the line that indicates the current state as @vulicvladimir showed based on a powerful red deer example. These Czech red deer still do not cross the no longer existing “Iron curtain” boarder, although none of them has ever experienced it. More about this example in my post “Better sorry than safe“.

We should realize there are many contact moments that we can utilize a lot better and @brian_wong thought out a way that his company is utilizing now. Among others based on his book “The cheat code”, he challenged us to be inspiring, to think big by presenting moonshots that will challenge others.

Why do moments matter? And how to make use of them? @brian_wong #infoShare pic.twitter.com/j7YwZ8v3qo

How to get noticed in this overwhelming information age where everyone is generating loads of content: by remaining human and supporting our advocates explained @markwschaefer, author of “The Content Code: Six essential strategies to ignite your content, your marketing, and your business”.

The room was completely packed when @paweltkaczyk  took the stage and explained us how machines might cheat us in the future.

Is there a celebrity on the #infoShare Inspire stage? pic.twitter.com/u0VrRuK4c5

Maciek Orłoś learned us how to improve our personal speaking skills, among others by timely shifting our gear, the right interaction with the audience, etc. @MaciekOrlos has created an alphabet where every letter stands for certain behavior/actions a speaker should consider.

You get sleepy when driving on an empty highway, which happens to people as well when you talk without using gears #infoShare @MaciekOrlos pic.twitter.com/QQcgMSeZzr

Francoise Lamotte (@franlamotte) told that the insurance industry will have to become more customer oriented, among other thanks to technology this is possible.

Insurance companies will have to change the way they do business. The younger generation needs a different approach #infoShare @franlamotte pic.twitter.com/x1X3IEmqx2

Sujan Patel explained us how to build a personal brand by sharing and creating valuable content. It takes dedication, but then you will be able to move mountains.

It was energising and stimulating to hear how Michał Szafranski produced his own book, well done. By showing how he did it, step by step he showed the audience how you can manage your promotion by yourself at low cost.

Why and how to self-publish your book? #infoShare @szaffi pic.twitter.com/iK0Kbqm7Ll

We often do not realise the complexity and challenges organisations are facing to provide services to us. Skip Haffner shared what it looks like in the aviation industry.

How a little black book resulted in aviation automation, by Skip Haffner of @Jeppesen #infoShare pic.twitter.com/gxRGMM5x51

How to catch the moon was according to Maciej Budzich (@mediafun) and @jakubgornicki their craziest title ever for a session at a conference. They shared several available multi-media tools that can support to tell your brand story.

How to make use of available tools to tell your multi-media brand story #infoShare @jakubgornicki @mediafun pic.twitter.com/jBFrq5gvSa

Last but not least, Michał Sadowski (@sadek) showed in 10 steps how to build a brand and explained the audience how important it is to measure the results of your activities. Having your startup is not like lying on the beach & drinking a cocktail, it means working hard and a lot of dedication.

Special thanks to Bartek for the beautiful musical support during these two days!

Finally Bartek can play! Come and join at the Inspire stage #infoShare pic.twitter.com/USeOix4ZBs

We need to care better about the user

The key summary for me: Technological innovation has an amazing potential, but unfortunately, too often we take too little care about the user interface. This causes that it is hard, especially for the older and younger generations to fully benefit from it. In addition, organizations will have to change rather dramatically to benefit from these technological opportunities. It is about being disruptive or be disrupted.

What we could show on stage was only possible thanks to the willingness of the speakers to come to Gdansk, the support of many volunteers, the help of the audio/visual team, security team, the cleaning service and the infoShare team. Thank you all for your participation!

Thanks to the audience and especially the people who dared to leave their personal comfort zone by asking questions during the Q&A sessions.

You can find me on

I'm both a sociologist and an electrotechnical engineer. A great combination that stimulates me to look for working solutions.

I believe people and organisations should benefit from IT. Therefore, I love solving organisational and technological challenges.

I love cooking, swimming, biking, running and digital photography. I already managed to finish a marathon and half an Ironman. Looking for the next challenges

My wife and three sons keep me focused on what life is really about.