Are you looking for the Tholons Top 100 Outsourcing Destinations 2012? Please read my blog post about here.

During a webinar organised by Gobal Services analysts of advisory firm Tholons have just released this year’s Top 100 Outsourcing Cities ranking. Although the top 10 didn’t dramatically change the shift towards nearshoring is clearly noticeable. Tholons concludes the 1st position of India’s Bangalore is under pressure. Eastern Europe in general and Poland more specific are well ranked as emerging locations.

The group of top cities increased

While Bangalore retained first place for the fourth year running, Mumbai moved up to second place this year, with its huge labor pool consistently displaying enhanced service delivery in complex and high-value FAO services. During the webinar Tholons announced Bangalore will be facing severe competition in the upcoming time. A 1st rank in the next year is far from certain.

The traditional outsourcing countries are no longer alone

About 10-15 years ago US and UK based outsourcers only considered India and the Philippines to be their outsourcing destinations. Over time outsourcers have become more convenient in outsourcing and many more countries have joined. For different reasons today different locations are being considered.

Tholons has noticed more focus on near shore although being higher cost locations. This choice is being made for many different reasons like near time zone, language and cultural affinity. When it’s IT related intellectual property law is a very important decision factor.

Low cost is according to Tholons’ survey no longer the main driver. It’s even proven higher cost locations can be more effective. This changes the focus more towards cost effectiveness instead of just “low cost”.

Because of this change Tholons has decided to extend its list from 50 up to 100 cities.

But even those 100 cities don’t cover the full market. This is just showing some part of the outsourcing world. Depending on your needs there are far more good locations to be considered.

Tholons has divided the top 100 cities into three groups: emerged, emerging and next wave cities. The main difference between the 10 emerged and the 50 emerging cities is the scalability you can achieve. Besides there is a fourth group: “On Tholons radar” which are cities that could join the list in the upcoming time.

Three Polish cities rank on this year’s list. Kraków managed to climb 3 places and is leading the emerging group while Warsaw maintained its position among the emerging cities. Wrocław is with ranked for the 1st time. Already for some years it was “On the radar”.

Not on the list, but on the radar is Gdansk. Thanks to the huge effort of the local government Gdansk is for sure an emerging BPO and ITO city.

Eastern Europe is the leading continent

Based on the data provided by Tholons I prepared some graphs. Eastern Europe appears to be leading when you sum the number of cities by region, which proves the shift from the traditional outsourcing regions towards more nearshore outsourcing. 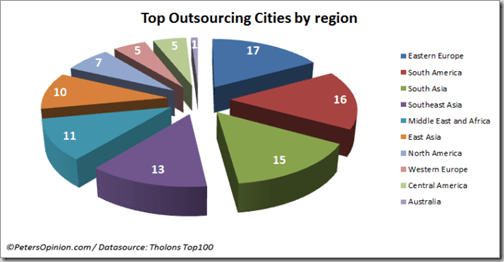 I realize this graph doesn’t tell us anything about the market size. Because Bangalore alone might have more turnover than Eastern Europe as a whole. And the picture changes when you sum the number of cities by country. India is leading this list with 14 cities. 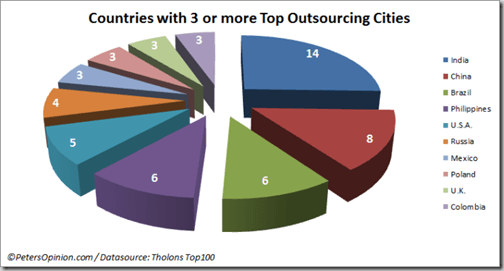 Within Eastern Europe Russia and Poland are leading. Those are the biggest nearshore markets for Western-Europe and even for the US it’s becoming a more important outsourcing market. This is not expected to change although I expect Ukraine will become a good follower soon. It looks like Tholons just didn’t notice them yet. 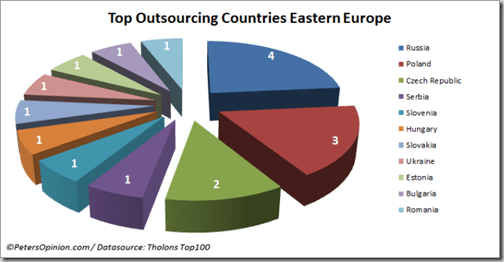 You can download the full dataset here or read is as PDF here.

In the end you will have to decide yourself

If you are not just looking for a tremendous amount of resources most of the mentioned cities could be considered. Like Brian Tumpowsky, director sourcing and governance of the Publicis Groupe, mentioned during the webinar it’s most important to keep your outsourcing policy balanced.

What technology do you need? Will the location be able to provide it? What is your experience?

75% of the cities on the list is for most companies not feasible. Going to China could be the next step for some companies, but for most this will be years away. (Brian Tumpowsky during the webinar)

You might decide in favor of a certain destination because of:

Tholons’ list can support and inspire you when you consider outsourcing abroad. Just like other lists it’s just a ranking based on a group of relevant factors. All these factors will be relevant to you as well, but the weight per factor might be different for you. Therefore, based on this list you should prepare your own list. Is wish you good luck while doing this. In case you look for help feel free to contact me by filling in the contact form here. Or let’s discuss on Twitter, you will find me here.

END_OF_DOCUMENT_TOKEN_TO_BE_REPLACED

END_OF_DOCUMENT_TOKEN_TO_BE_REPLACED
« Older Entries
Manage Cookie Consent
To provide the best experiences, we use technologies like cookies to store and/or access device information. Consenting to these technologies will allow us to process data such as browsing behavior or unique IDs on this site. Not consenting or withdrawing consent, may adversely affect certain features and functions.
Manage options Manage services Manage vendors Read more about these purposes
View preferences
{title} {title} {title}
Share This