I noticed that my blog post about the Tholons Top 100 Outsourcing Destinations 2010 still attracts many readers. Although, this post is about 2 years old, it didn’t lose its value. The conclusions of that post are still valid. Tholons has also published the Tholons Top 100 Outsourcing Destinations 2012. The most important conclusion is that the 2010 trend seems to continue. Eastern Europe is increasingly important as a nearshoring destination. Besides, Chinese cities are rising on the Tholons top 100 2012. The three Polish cities kept or improved their ranking. 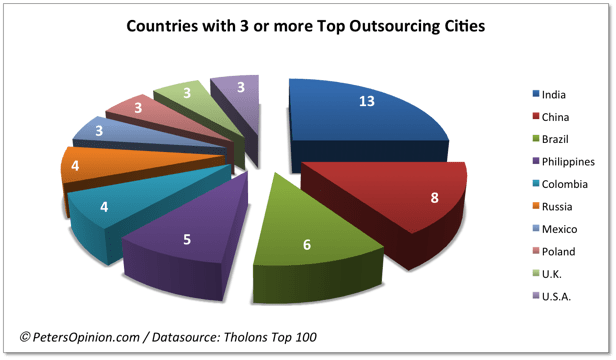 Without any doubt India is still the leading outsourcing destination, its position became even stronger than in 2010. Nevertheless, it’s noticeable that other countries are knocking on their door. Especially Chinese cities are climbing the ranking. But not only, also Eastern Europe is doing very well. 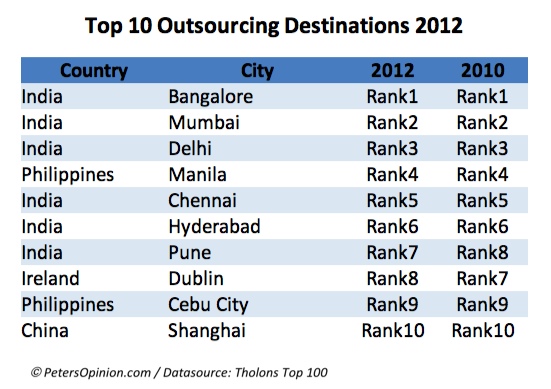 Especially, the entry of Lviv is remarkable. In 2010 I mentioned that Tholons didn’t seem to have noticed what’s happening in Ukraine. Two years later they immediately rank 91. 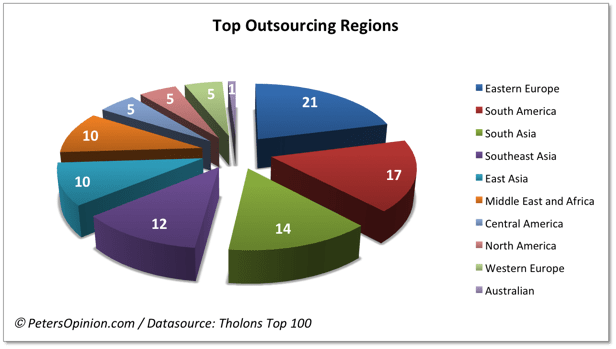 The ranking on the Tholons Top 100 shows us something about the readiness of these cities/countries for delivering outsourcing services, but it doesn’t include any information about the current size of the outsourcing business in the cities. According to Tholons Eastern Europe is increasingly attractive as an outsourcing destination, but whether we can see this trend happening in reality cannot be derived from the Tholons Top 100 dataset, which can be downloaded here.

END_OF_DOCUMENT_TOKEN_TO_BE_REPLACED

END_OF_DOCUMENT_TOKEN_TO_BE_REPLACED
« Older Entries
Manage Cookie Consent
To provide the best experiences, we use technologies like cookies to store and/or access device information. Consenting to these technologies will allow us to process data such as browsing behavior or unique IDs on this site. Not consenting or withdrawing consent, may adversely affect certain features and functions.
Manage options Manage services Manage vendors Read more about these purposes
View preferences
{title} {title} {title}
Share This