Many friends and colleagues have been asking how I got so addicted to triathlon and what keeps me motivated and therefore I’ve decided to share my sports story, because it hasn’t always been like that. Hopefully, this story will motivate others as well.

Do you know that feeling that you should be more active and that it is high time to start moving? I had that feeling for years. Up and down I was doing some things for a short while like visiting the gym and inline skating. But it never got really serious. I always managed to find excuses: busy at work, busy with the family, poor weather, too tired, etc. But then something changed …. An app got me running and that was not the end.

Spring 2011 a potential client visited our office in Gdansk, Poland. Somewhere during the small talk, he mentioned how he started running (again). He showed his app and mentioned that it offered training schedules as well, for FREE!

Those were still rather the early days of smartphones and there were many apps, but hardly any really great ones. This app looked cool and I decided to download it. For years Runkeeper, https://runkeeper.com/, became an important part of my life.

I chose a training program. A very simple one with a title like: “Manage to run 5 km”. It started with 3 weekly sessions of about 12-15 minutes with repetitions like 1 minute jogging, 1 minute walking. After these sessions, I decided not to make use of the social sharing options the app offered, I felt embarrassed that I wasn’t able to run more.

In the past I would have run longer, faster and further than the plan proposed. But that had caused all kind of issues, especially with my knee. Therefore, this time I decided to stick to the plan and go step by step.

After several weeks, indeed I managed to run 5 km’s and quite soon afterwards 30 minutes after following a plan: “Run 5km within 30 minutes”.

My family started joining me. At first our sons just followed, but that has changed …

Together with friends we joined running events. The first 10K, the Westerplatte run in Gdańsk, was a real achievement, the half marathon in Gdańsk followed shortly after. At a certain moment, even wintertime was no longer an excuse to stay inside. Running on fresh snow or while it’s snowing seemed real fun. Even a snowstorm and temperatures like -15C didn’t keep me inside anymore. Winters were just too long to use them as an excuse.

In 2015 our son’s running trainer mentioned that he was old enough to start in a local triathlon, an MTB sprint. He decided to join and there the triathlon virus caught us.

A friend challenged me to join a triathlon he had registered for some months later. I liked the idea, but got injured. Due to a calf muscle strain I could barely walk, but the physiotherapist told me I was allowed to swim and bike.

That made me start swimming again, something I hadn’t done for many years. I removed the dust from my race bike and decided I just had to give biking a try again. While living in The Netherlands I biked a lot, but since we had moved to Poland I hadn’t been cycling at all, just because I thought it was too dangerous to bike and to be honest, in those years it was rather dangerous. Fortunately, things had changed.

My breaststroke was still quite ok, but I didn’t manage to do more than a length of crawl. Breathing was the major issue, like many people are facing when they want to improve their crawl. I was able to catch up with biking rather soon.

After about 7 weeks I concluded I could run again. I did some 5K trainings and runs and declared myself fit enough to join the triathlon. This was a 1/8th Ironman, meaning 475 meters swimming, 22 km biking and 5 km running.

Swimming in the lake was rather fun. Although, the majority of the participants was swimming crawl, I managed to catch up with them rather well with breaststroke. Biking went at a decent pace and while running I exploded. It was just too hot. Those 5km’s were my longest ever. They took me about 42 minutes, instead of the 25 minutes I got already used to. But I managed to finish my first triathlon and it had been fun.

But it could have been different.

February 2016, I fell during a skiing lesson. My knee was rather painful and later on my back as well. After a day of rest, I was back on the slopes, according to the physiotherapist that wasn’t the smartest thing after all.

Fortunately, he concluded that my knee was rather ok, but my legs felt a bit “paralyzed” as well. A problem with several disks in my spine appeared to be the cause.

Since then I have been attending stretching and core power lessons twice a week for about three years. It’s unbelievable what this has done to me. I’m stronger, my muscles seem healthier, I recover faster, and back pains are past tense.

By the end of 2016 I started wondering if I could go further. I managed to finish 1/4th Ironman that season, so why not trying half? In 2015 that idea seemed a mission impossible to me, but after all the training and the successful 1/4th Ironman it seemed more doable. I read a lot of information about the essential training programs, time investment, etc.

Winter was tough. It was cold and for months there was snow lying on our running tracks. That snow became ice and it just didn’t want to go away. Just before I started joining the first races (10K, half a marathon) the snow disappeared and finally we could run normally again.

Part of my plan for 2017 was losing several kg’s. A dietician seemed not to be too interested to help, but after many reminders he prepared some kind of a week menu for me. Losing weight was rather easy, you just need to burn more than you consume. As simple as that.

I especially started monitoring and reducing my carb intake and tried to skip carb at all in the evening. Not drinking alcohol, not having snacks and sleeping a bit more helped as well.

Early mornings I went running, biking or spinning without having breakfast, the fastening approach. This causes a 10K feels like a marathon. Postponing the breakfast after the training further supported the burning of body fat. But don’t do this continuously, because it seems not to be super healthy.

I read a tip by a Dutch pro cyclist. To lose weight, he eats several fried eggs with bacon before a long bike ride, because you need to eat some fat, before your body starts burning it. So, I gave that a try as well.

I managed to lose about 5 kg’s in several months, meanwhile gaining a lot more muscles. And 5 kg’s less means a lot while climbing a hill on your bike.

My swimming was still poor. In 2016, I had won a voucher to join the trainings of a triathlon team for one month. I decided to use it to swim a lot in May 2017. At a certain moment, I swam 4-5 times a week and I was amazed how my swimming improved. I continued with the 4-5 times a week schedule in June and managed to reach over 2km within one hour, which was back then really unique for me.

The first triathlons of the season went rather well, although I didn’t feel comfortable swimming crawl the whole (Sprint or Olympic) distance. Fortunately, that changed after about 4 times swimming in open water, I felt confident.

To be prepared for the big race I participated in the Olympic Triathlon in Gdańsk. The race went smooth, 30 minutes for a 1,4 km swim. Then I knew I would manage the 1,9 km swim of the 70.3 Ironman.

As a birthday gift, I received a bike fitting session. This is something that every triathlete/biker should consider. Several adjustments had to be made to my bike, but I immediately noticed the difference at the next triathlon. Thanks to a different division of muscles used, I didn’t have any cramps while switching from biking to running. My running pace was better than ever before.

Then I found “The Triathletes Training Bible” by Joe Friel but started using it too late. For sure the training schedules and exercises presented in this book are worth following. His other book “Your best triathlon” is may be even more practical.

Due to private and business obligations, I had to skip about 20-30% of the advised weekly trainings. Nevertheless, my fitness and power increased.

Thanks to a presentation by nutrition scientist Asker Jeukendrup I learned about the relevance of nutrition planning. Some people claim that a triathlon consists out of 4 disciplines: swimming, biking, running and eating, or even 5 if you include resting as well. Asker presented their application “Fuel the Core”, https://www.fuelthecore.com/, which I decided to consult for the 70.3 Ironman nutrition and hydration plan. I felt rather sure during the race that I wouldn’t get hungry and it appeared to be a good distraction as well.

I set a certain target for the 70.3 Ironman, a target that was a lot more ambitious than the one I thought about while registering 8 months earlier. The aim was to finish within 6 hours: swimming in 40 minutes, biking 3 hours, running within 2 hours.

The weather was great. Sunny, around 22 degrees. Swimming went as planned. The first transition was a bit slow. I left the water rather dizzy and transition just took time. Although, it was rather windy, I managed to achieve an average of 32 km/hour on the bike as I was hoping for. The second transition was again a bit slow. Running the half marathon was tough from the very start. My legs were rather painful, and the pace quickly increased, despite the energetic support of my family.

I was relieved when I passed the finish after 5:43:54. Mission accomplished! But that’s not how it works with me. What’s next …..?

Due to a lack of next goals, motivation dropped, just as mentioned in Friel’s bible.

After I registered for a few other races, I managed to get back to more structured training again, but not as dedicated as before. For two seasons I didn’t have a real “big race” planned. I just took part in several Sprints and 1/4th distance races combined with some running starts and cycle tours. The great thing is that we as a family train and participate in races together, which is very special and motivating as well. Without their support and motivation it would probably be hard to maintain a decent fitness level.

I needed to register for my next 70.3 Ironman to regain my dedication. On the 29th of June 2020 I plan to start in my home country, the Netherlands. 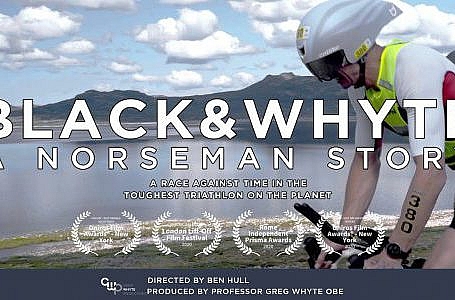 The ultimate test – The Norseman